Are you an emotional hoarder? 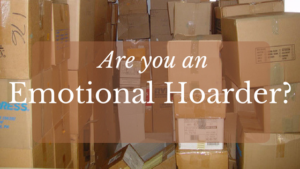 Are you an emotional hoarder?

We all gather and store emotional responses to life experiences but how healthy that collection is, can vary vastly.

Emotional hoarding is like a shed or garage full of boxes. We’ve collected these boxes over time and they fill the space so much so that it has ceased to function as it was intended. Some of these boxes contain nic-nacs from our childhood, broken toys, things we hope to hand on to our own descendants. Some boxes loom in the corner but are a mystery to us as to what they hold. Some boxes have followed us from move to move, never opened forever travelling with us. Some are full of stuff handed to us by others: old friend and lovers, colleagues, strangers who affected us deeply on a single meeting. Right down the back there are paint tins and jars of screws and nails, often inherited from those who came before us, ancient and yet held onto because they were once bought with a purpose and could one day be useful. There is fear attached to the idea of getting rid of these things, deep down knowing they no longer serve us and yet terrified that the day will come where their need becomes apparent and they are no longer there.

Every now and then we pull out some of these boxes in the hope to make sense of them and declutter our space, often after a few drinks, we haul a few out and potter around them poking and rummaging, often to no avail, only to become overwhelmed by the immense task and to shove them back in again.

Occasionally we succeed in the removal of a box or two, often by removing only some of the items and the just tipping the rest of the box in with another one of similar stuff. Or we’re successful in clearing a pathway, weaving between the towers of boxes, a direct route to the emotional responses we deem necessary and effective, our “go to” response in our times of need.

Sometimes we find ourselves rummaging through boxes on the hunt for something specific, we know it’s in here somewhere, and our frustration grows as we become intensely aware of the time and energy we are wasting as we go through boxes of emotional responses, never quite turning up what we need, often making do, sometimes wishing we could just burn the place down and start again.

I believe pulling out those boxes and talking about what’s in them and how we came to acquire those boxes is a slow and ineffectual pathway to clarity. Certainly over time, the sorting through things slowly gains you clarity sufficient to start filtering the contents, sorting them in to groups but don’t we all yearn for a hoarders intervention like what we see on TV, the one where they turn up with a skip and be-gloved crew??

I was an emotional hoarder. I used to gather up everything that anyone had ever put on me. Gathered it up, accumulated it, added my own flavour to it and stored it away, more and more each day. I would talk about how I acquired my boxes, I would discuss methods to clear some of it away only to ever succeed in removing a small amount, never really getting at the heart of the problem and simply replacing one box of emotional clutter with a new one. For me, Creatrix® was the hoarders intervention of which I dreamed. It was like someone had turned up and cleared every thing out of that space. As it sat there piled on the lawn, I was guided to decide what to hold on to and what to release. Each decision I made was with my higher needs and purpose in mind, from a place of my greater good instead of fear and longing and confusion. Only the truly useful and complete was carefully placed back inside, organised, collated, categorised and labeled. Mysteries were unveiled, hurts healed, and a conscious decision made, to let it all go.

With just a few sessions, I felt cleared out and lighter, in love with everything that I kept hold of and now so aware of everything that I was completely confident that anything new would be awesome, that nothing old and broken would ever be allowed back in. There was no fear that they might one day be useful. Confidence that I had everything that I needed and I the means to acquire new tools and skills if that was ever required. I wasn’t going to ever be the hoarder that after six months in the “where are they now” episode had not only filled back up their space but that it was worse than before. Six months later, I was a clear as ever. Emptied out of the old crap and only full of the useful and purposeful. I was also great at refusing to take on that box of crap from someone else. Whenever, someone tried to foist something on me, I was prepared and skilled enough to decline without fear or more accurately care, of reprisal. And when the big stuff came, the stuff that you think you’ll never survive, I was able to take that box, sort through it with care, take the lesson I needed from it, and find the perfect spot for it inside so that it served me well.

I once was an emotional hoarder. Many people I know are emotional hoarders. They hold onto everything their ancestors handed them, boxes from their childhood, from relationships, boxes of their own clutter and boxes handed to them by others. And I see them struggle with them. I see them as they pull them out every now and then and rummage through them. I see them as they wish it all away and I see the fear in their eyes when it’s suggested that they let it all go. Can I tell you, there is another way. Let me show you.