4 Empowering Lessons from 100+ days of Journaling

It’s the big thing, along with daily meditation and green smoothies to get you in the zone. To be fair and full disclosure I love a good green smoothie as long as it’s not packed full of sugar, and if I were more disciplined I might even get on the meditation bandwagon, though for the moment Creatrix(R) and EFT cover all my needs.

Journaling as a writer and as a High School English teacher also has a certain appeal, and as a preteen/teenager I used to keep a diary.

Just before the calendar clicked over to 2016, I made a few resolutions, though again to be fair they were more bucket list items than resolutions as such. Things I wouldn’t mind being able to say that I’d tried and achieved even if they were never to be repeated. A photo a day challenge (I  completed 2 in January) and daily journaling (The goal was at least 90 days uninterrupted).

And so went my first entry:

Day 1 30th of December 2015
Journaling was going to be a “new years” kind of thing that was going to be a part of a whole new me/new approach kind of spin for 2016. Although it was going to be a Day1 Jan1 start I’ve started 2 days early. I’ve decided on a “Why put off to tomorrow what can be started today?” motto for the year. Take action, start today! Here’s to starting new habits. I want to be more reflective on a daily basis, keep a gratitude journal, regular or even daily writing and reframing of my goals, a celebration of achievements and all of the kind of stuff that’s going to keep me on track, motivated and productive. This will also let me brain dump ideas, worries, blocks, a place where I can more precisely identify strengths and weaknesses.

In so many ways I had to refrain from editing this entry as I retyped it. Refrain from rewrites and commentary and explanation and embellishment, other than to add that my day 2 post acknowledged that my day 1 post went unfinished. In many ways day 2 is more revealing, and interesting, and insightful but this post is certainly not going to be a log of the 114 days worth that now exist. It is a reveal of what can come about from activities such as journaling and what I learned.

Lesson One: Done is done

Even day 1 was incomplete and day 6 starts with the phrase “tokenistic journal entry”. The length and profundity of journal entries ebbed and flowed but I’m yet to miss a day. It was more important for me to create the habit than it was to hold myself to an imposing (potentially impeding) standard. I simply followed the process and tried not to think too hard about the results- a principle I apply to both my businesses and the results still come, just like they did with my journaling efforts.

When I thought about the nature of being consistent it brought up so much for me and on reflection my clients and friends too. Is it more important to do something consistently every day or is it more important to show up with a consistent standard that is sporadic? Or should we be holding ourselves to a standard that means everyday we turn up to the same standard? But does that mean we lower our standard in order to be realistic or exclude people from showing up because they self select out of the process knowing that they can’t meet that standard of consistency?
OOOhhhhh keen to know your opinion but this is where I went with it:

It is more important to show up as consistently as possible but what that looks like was actually very inconsistent. Some days I wrote several pages of deep insights, other days were short mundane recounts of the day. Sometimes I was business focused, sometimes family focused. Sometimes I positively re-framed everything, other times (though pretty infrequently) I’d have a little pity party. Some entries were so valuable for me to have done and others would have made no difference had I skipped them entirely. Bottom line, it worked for me and meant that I have some great content, have made some profound discoveries and have a record of some day to day living that in years to come I will cherish even though it didn’t change my life at the time. A rich tapestry of life, if you will.

In my opinion there is no such thing as actual perfection but a few things come close. The energy I get from reflecting on ideas and experiences is incredible. I get completely pumped by running ideas over in my head turning them around, extrapolating meaning and effect. Seriously I love it. So the process of journaling as a reflection sometimes left me pages deep in and itching to read them out to my husband who (because I often wrote at night) was often barely awake let alone capable of providing an actively engaged audience. It was from these entries that I gained my greatest insights and personal affirmation. Yet if I’d worried about ensuring every entry was to this standard they may never have been written.

Some of my most constructive entries consisted at least in part of a list and not just things to do lists either. In my MOST empowering entry I was able to list 19 things I completed/achieved in 2015, which suddenly put a lot of things into perspective. Written out that way brought the previous year into stark focus and I started to feel a real sense of pride for a year that paradoxically I despised so deeply.

As a result of reintroducing daily journal writing into my life, I achieved a goal, enjoyed a sense of accomplishment, developed a habit, improved my self discipline, made some great insights and learned 4 powerful lessons. I believe that when you focus on the process of writing and reflection, without any attachment to the quality of what you’ll produce, the process will ultimately give you amazing results. 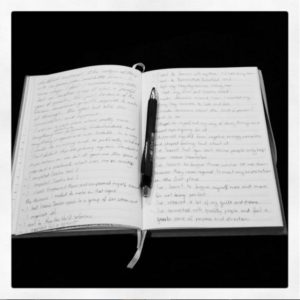